We are going to create an oasis on a barron classroom rooftop. Our collaborative installation made from re-purposed materials will invoke issues of common household waste and the ecological nature of consumerism. 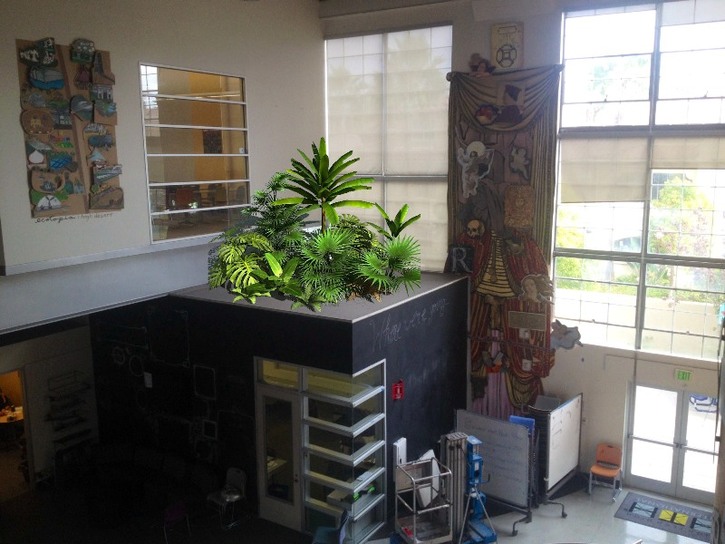 We will create a sculptural oasis from common household refuse to produce this art installation. The concept will challenge us to create beauty from unwanted waste material. We will take the items that are destined for landfills and utilize them to provoke an artistic statement. The hope is that the project will resemble a lush spring, alive with exotic flora and fauna to represent issues surrounding waste, deforestation and the repurposing of materials.
Junk Sculpture Construction Process
It is important to use the materials thoughtfully when crafting your sculpture. Let the size and shape of the materials dictate the formation of your concept. It is best to build the basic form first and gradually flesh it out to achieve the detail you desire.

Rainforests are forests characterized by high rainfall, with annual rainfall between 250 centimetres (98 in) to 450 centimetres (180 in).[1] The monsoon trough, alternatively known as the intertropical convergence zone, plays a significant role in creating the climatic conditions necessary for the Earth's tropical rainforests.

Around 40% to 75% of all biotic species are indigenous to the rainforests.[2] It has been estimated that there may be many millions of species of plants, insects and microorganisms still undiscovered in tropical rainforests. Tropical rainforests have been called the "jewels of the Earth" and the "world's largest pharmacy", because over one quarter of natural medicines have been discovered there.[3] Rainforests are also responsible for 28% of the world'soxygen turnover, sometimes misnamed oxygen production,[4] processing it through photosynthesis from carbon dioxide and consuming it through respiration.

The undergrowth in some areas of a rainforest can be restricted by poor penetration of sunlight to ground level. If the leaf canopy is destroyed or thinned, the ground beneath is soon colonized by a dense, tangled growth of vines, shrubs and small trees, called a jungle[citation needed]. There are two types of rainforest, tropical rainforest and temperate rainforest.

Rainforest in the Blue Mountains,Australia

The forest floor, the bottom-most layer, receives only 2% of the sunlight. Only plants adapted to low light can grow in this region. Away fromriverbanks, swamps and clearings, where dense undergrowth is found, the forest floor is relatively clear of vegetation because of the low sunlight penetration. It also contains decaying plant and animal matter, which disappears quickly, because the warm, humid conditions promote rapid decay. Many forms of fungi growing here help decay the animal and plant waste.

More than half of the world's species of plants and animals are found in the rainforest.[14] Rainforests support a very broad array of fauna, including mammals,reptiles, birds and invertebrates. Mammals may include primates, felids and other families. Reptiles include snakes, turtles, chameleons and other families; while birds include such families as vangidae and Cuculidae. Dozens of families of invertebrates are found in rainforests. Fungi are also very common in rainforest areas as they can feed on the decomposing remains of plants and animals. Many rainforest species are rapidly disappearing due to deforestation, habitat loss and pollution of the atmosphere.[15]