Jean-Michel Basquiat: his best works and the meaning of his art 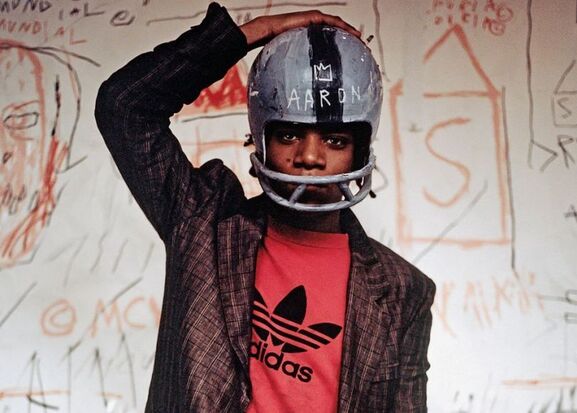 Jean-Michel Basquiat used the signature SAMO (Same Old Shit) in the streets of Manhattan. Through the walls and subways of New York, his graffitis, loaded with poetic messages, questioned capitalism, greed and the nepotism in the world of art. His taste for cultural blending and his hatred for racism gave life to a neo-expressionist work that is sometimes obscure and anguished.

In 1978 Jean-Michel sold to Andy Warhol some postcards illustrated by him, in a Manhattan restaurant. The two had a similar conception of art, which should be “open, popular, public” and not elitist. In fact, Pop Art speaks a language that everyone knows and transforms common objects, such as the Coca Cola can, the Campbell soup, Brillo soap, into artistic images, turning famous characters like Marilyn Monroe and John & Jacqueline Kennedy into immortal icons.

The turning point in Basquiat’s life began with this encounter with Warhol, who later welcomed him into his factory, becoming his tutor. Poet, musician and graffiti prodigy, at the end of the 1970s Basquiat had perfected his pictorial style of obsessive scribbles, elusive symbols, diagrams and images of mask and skull, developed since he was 20.

He was not a fan of interviews, but in one he declared: “I don’t think about art while I’m working. I try to think about life.”
​
Basquiat drew his subjects from his Caribbean legacy – his father was Haitian and his mother of Puerto Rican origins – and a convergence of African American, African and Aztec cultural stories with classical themes and contemporary heroes such as athletes and musicians. Often associated with neo-expressionism, Basquiat received great acclaim in a few years, showing himself alongside artists such as Julian Schnabel, David Salle and Francesco Clemente.
Below is a selection of the artist’s most significant works.
Il Duce (1982) 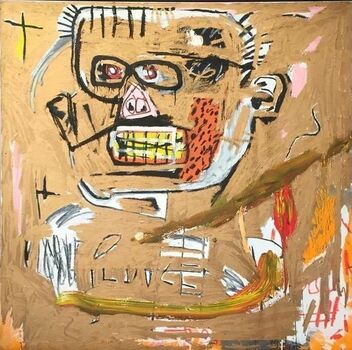 ​
​Basquiat painted him in a very effective manner. In fact, the graffiti artist has succeeded in rendering with a few strokes the physical grandeur of the Duce and also the great vehemence he put into his speeches. His proverbial energy, visible from the presence of violent brushstrokes, reflect his stark vision of the world. Curious is the fact that Basquiat also tries to write in the language of the nation to which he refers, so that we can read the painter’s italian.
"His taste for cultural blending and his hatred for racism gave life to a neo-expressionist work that is sometimes obscure and anguished."
​Discography Two (1983) 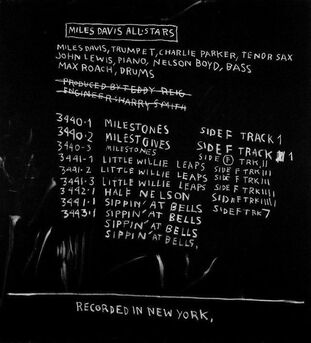 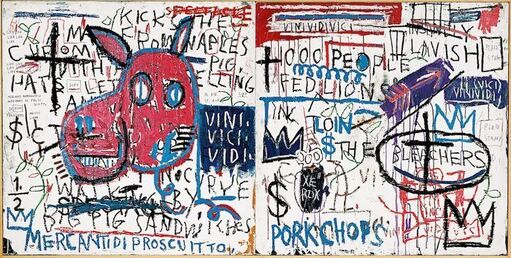 ​From his passages in the city, following Andy Warhol and together with his friend Francesco Clemente, came out this extraordinary work, still preserved today at Bilbao’s Guggenheim. Jean-Michel Basquiat dedicates his Man from Naples to the Italian city, a work produced directly during his first trip to Italy (1982). The muzzle of a donkey, the legendary “ciuccio” mascotte of the city’s soccer team, stands out surrounded by the artist’s usual scathing tags. With a lot of misprint, for who knows italian.
​
The title of the painting derives from a sentence written above the head of a red pig which, although surrounded by innumerable inscriptions, splashes of color, intersections and elementary signs, dominates the composition like a totemic image. Humor, irony and primitivism define this painting as strong and representative.
"Basquiat drew his subjects from his Caribbean legacy...and a convergence of African American, African and Aztec cultural stories with classical themes and contemporary heroes such as athletes and musicians."
Pollo Frito (1982) 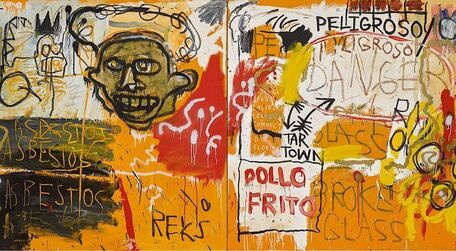 In this work the painter reveals virtuosic pictorial abilities: Basquiat constructs intricate layers of oil, enamel and acrylic on the surface of (untitled) Pollo Frito, and then traverses them with burning incisions, working positively and negatively to create an incredibly densely worked surface. The painting is full of the key iconography of Basquiat, including the powerful skull heads, the three-pointed crown and the dense network of repeated textual references that recur in Basquiat’s most significant works. His colorist abilities are also on display, with the canvas almost completely covered with incendiary shades of orange, red and yellow.
"...innumerable words...become a true compositional element of the picture..."
​In Italian (1983) 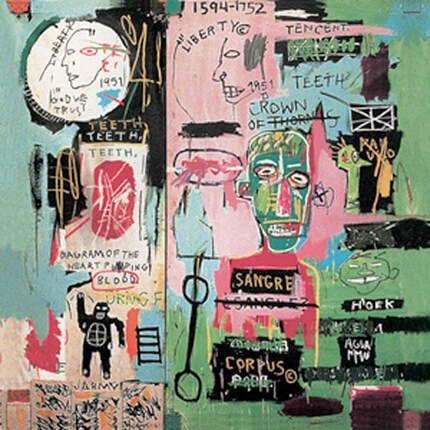 ​This painting shows many of the symbols that Basquiat used in his works. The reason for this name is not known, since only one word in the painting is actually in Italian, Sangue (blood), which is crossed out and the Latin word (“Sangre”) is written in its place. The words “Crown of thorns” appear, with barred “Spine”, a common reference in the work of Basquiat. A diagram of the heart that pumps blood and the word Corpus refers to the incident he had as a child. In addition, Basquiat uses large patches of mint green, blue and pink as a general background, which look like layers of paint that come off a building. The numerous layers of meaning and color combinations create a fascinating and detailed piece.

After Warhol’s death in 1987, the young artist became increasingly depressed and paranoid. On August 12th, 1988, at the age of 27, he died in his New York loft due to an overdose.
​
Fred Braithwaite summarizes Basquiat in this way:

“Jean-Michel lived like a flame. He burned really bright. Then the fire went out. But the embers are still hot.”

And so it is, we continue to admire this “analphabet artist”, as he used to define himself.