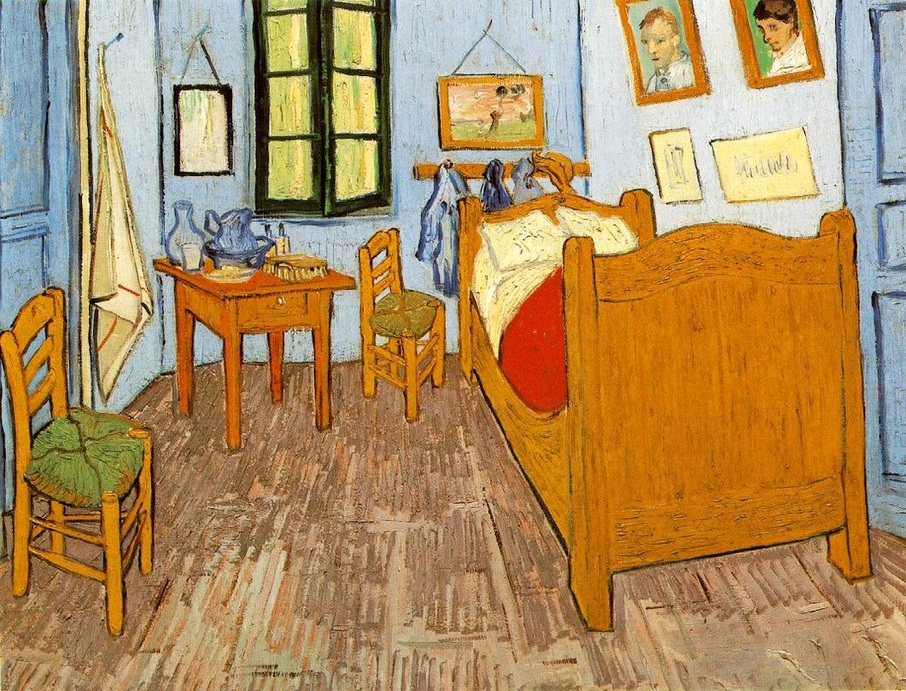 Choose a painting or drawing by an artist famous enough to be properly researched. The project requires that we recreate the artwork and imagine a story that would befit the setting of the piece. This creative writing assignment asks that we put words to an image and create the story behind a vision. We ask that each student research the artist and the genre, and the place and time the art was produced. The literary challenge is to imagine a scenario that relates to the situation the painting exhibits. Use the objects, environment and relationships to produce a story that illustrates the piece. Write a brief explanation of the artist and historical significance of the period in which the work was produced, then follow up with the semi-fictional inventive literary scenario.

Gather historical reference:
In February 1888 van Gogh settled at Arles, where he painted more than 200 canvases in 15 months. During this time he sold no pictures, was in poverty, and suffered recurrent nervous crisis with hallucinations and depression. He became enthusiastic for the idea of founding an artists' co-operative at Arles and towards the end of the year he was joined by Gauguin. But as a result of a quarrel between them van Gogh suffered the crisis in which occurred the famous incident when he cut off his left ear (or part of it), an event commemorated in his Self-Portrait with Bandaged Ear (Courtauld Institute, London). (from Wikipedia)


Descriptive prose: (setting up the historical context)
"Arles, France was a sleepy southern village in the middle of a country side, gold with rows and rows of rich amber, honey wheat. Vincent spent his days painting the scenic landscape. His nights were spent drinking and cavorting in one of several brothels that provided the only real nightlife in this town. He regularly frequented a dark yet lively den that reeked of Absenthe, tobacco and fruity perfume.  The worn wallpaper spat stories of squalid tales, drunken inspiration and heartache that were so common in this small French village…."
-Jeremy Farson

“The man who sleeps in this room longs for the woman who used to visit his bedside spending long, lonely hours seated in a rickety chair of wood and loosely woven green rattan. On the pictured night he was nowhere to be found. He had ventured outside, into the realm of the living, half drunk and swearing that he would right the wrong he subversively cast upon the woman who haunts every sleeping and waking moment. She treated him like the child she couldn’t have. She adored the sweet sensitivity oozing from the paintings that decorated the walls of his bedroom studio. She was the inspiration he labored over when he could not comfortably stand or strong enough to lift a brush. The artwork displayed the contents of his imagination, but the small world of his complex and cluttered mind was too frightening a place to face in bleak solitude. He needed her back and would risk health and humiliation to prove his desire to change….”    -Jeremy Farson

The Collaborative Aspect: (the rationale behind the project)

Ideas on the significance of this project ….(ramblings)..
It is an exercise in looking. As we decipher the visual elements of an artwork, we put ourselves in the artists mind. The writing will inform the reproduction of the painting and vice versa. As we paint each element of the artwork, we will likely imagine a life within the image. As we research and learn about the artist, the time he lived, and the history behind his work and the era in which he produced the image, we will become familiar with the context in which the artist worked, thus facilitating an accurate portrayal on which to base our fictional account the picture visually implies. If a picture is worth a thousand words, we will work to see it so....